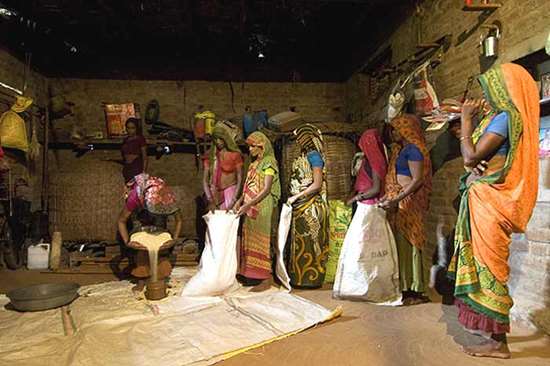 […] A unique idea that has taken root over the last two years among the tribespeople here—the Rathwas, Dungras, Chaudharis, Bhils and Nayaks, across 1,200 villages in the Narmada, Baroda, Surat and the Panchmahals districts—is that of creating what they call green economic zones (GEZs) as bulwarks against special economic zones (SEZs). Rather than lose land to corporate giants, they want to reclaim it by focusing on reviving tribal culture and language, fighting migration, creating economic self-reliance.

With happy faces greeting you at every village, it’s clear tribal communities are aware of the importance of being at the vortex of such positive transformation. Watda village of Baroda district has found financial autonomy through eight microcredit groups and a grain bank, both run by women. The grain bank is no more than a dimly-lit house where some 500 kg of maize, the staple of tribal populations in these parts, is stored in three ceiling-high baskets. The stock is of “deposits” of 5 kg per year made by 60 families, on which they earn interest. “For every 20 kg of grain a family borrows, it has to return 23 kg—an annual interest rate of 15 per cent. It’s a blessing: not only does it make us self-reliant, families that contribute to it earn interest,” says Raily Seema, president of the grain bank. Loans of grain help out when market prices shoot up during shortages, not unusual in the summer months.

Fuelling such change and overseeing it at the micro level is a network of Gram Vikas Kendras set up across the region by the Baroda-based Bhasha Trust, a voluntary group. […]

Much of the confidence the tribals have found to deal with practical problems is the result of what the Adivasi Academy in Tejgadh, also overseen by Devy’s group, has done by way of training. The academy is a picturesque red-brick building set on a 10-acre campus at the base of a misty hill some two hours from Baroda (see box). The open-air classrooms, the non-formal learning environment and the rustic look lend it a Shantiniketan feel but there is a difference: it’s an academy for tribals that is run by tribals themselves. Children are encouraged to study their own culture and language, and graduate to serve their own community, rather than migrating to the city. Informal courses at the academy have made graduates learn and think about agriculture, literacy, finance, health and women’s empowerment in locally useful ways. […]

In other villages, like Kanalwha, non-formal classes are a hit. Chatra Singh, a teacher who takes lessons in his living room, focuses on practical learning—tree walks, lessons in mythology and religion by the river. He speaks to his 30-odd students in Rathwi. “These children have never been to school before,” he says. “So it’s important to draw their attention, which I do by teaching in their tribal language rather than in Gujarati.” There are close to 3,000 students enrolled in such non-formal schools.

At its core, the movement is not just about numbers but an increasingly conscious community—albeit one that has always taken pride in its tribal identity—inspired to protect its land. “We are well aware of the dangers of land acquisition. Everyone knows it’s happening all around us,” says Viresh Rathwa, who oversees a number of initiatives around Tejgadh. “But what’s amazing is how much everyone here wants to be part of this concept, even if they don’t immediately connect with a term like GEZ. They understand it as a green movement. After all, the fields are where we belong, and nobody wants to lose his home.”