Tip | Online resource: “Tribes of India: The Struggle for Survival” by Christoph Fürer-Haimendorf

This book tells of observations among Indian tribal populations spanning the period from 1940 to 1980. Ever since 1936, when a study of the Konyak Nagas marked the beginning of my career as an anthropological field-worker, I have maintained contacts with Indian tribesmen. […]

Any realistic and unbiased analysis of the present situation of the Indian tribes must inevitably contain some references to the failures as well as the successes of government policies and include also some criticism of those responsible for the misfortunes of many tribal communities. Such outspoken criticism may be considered inappropriate on the part of an observer who throughout his fieldwork has benefited from the assistance of numerous government officials. Yet no good purpose can be served by turning a blind eye to corrupt practices and the resulting failures of policies, thereby distorting the picture of the true conditions of tribal populations. My decision to choose frankness rather than diplomacy and circumlocution in the assessment of the actions of government departments in no way diminishes my gratitude for the many facilities offered to me by the governments of Andhra Pradesh and Arunachal Pradesh. […]

A problem even more important than the introduction of panchayati raj is the impact of industrialization on the tribes in areas rich in mineral resources. Certain areas within the tribal belt of Middle India, and particularly Orissa, West Bengal, Bihar, and Madhya Pradesh, contain rich deposits of minerals, and their exploitation and the establishment of great steel works in the very centre of the tribals’ homeland have already led to a large-scale displacement of tribal populations. Focussing on one particular incident connected with such industrialization, the Scheduled Areas and Scheduled Tribes Commission reported that out of 14,461 tribal families displaced from an area of 62,494 acres, only 3,479 were allotted alternative land. The disruption of the tribal economy and the degradation of tribals by large-scale industrialization, such as any visitor to the Ranchi area of Bihar can observe with his own eyes, is well described in the following paragraph of the commission’s final report on the problem:

“The tribals were dislodged from their traditional sources of livelihood and places of habitation. Not conversant with the details of acquisition proceedings they accepted whatever cash compensation was given to them and became emigrants. With cash in hand and many attractions in the nearby industrial towns, their funds were rapidly depleted and in course of time they were without money as well as without land. They joined the ranks of landless labourers but without any training, equipment or aptitude for any skilled or semi-skilled job.”

Though the commission recommended that the government, as trustee of the scheduled tribes, “should not allow the tribes to go under in the process of industrialization,” little was done to rehabilitate the displaced tribesmen and to train them for work in the new industries. Their eventual proletarization seems inevitable, and in the streets of Ranchi one can still see Munda and Oraon riksha pullers who not long ago were independent cultivators tilling their own land. […]

Tip: To read the book online, use the following hyperlinks

Recent developments in the Indian press 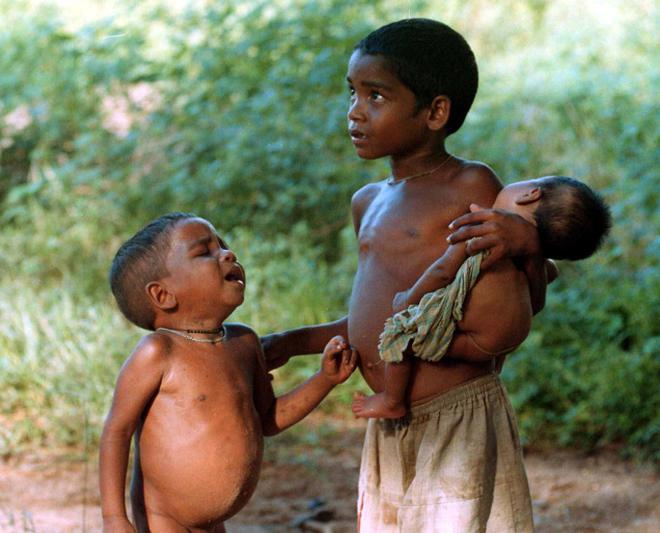 About 842 million people, or roughly one in eight, suffered from chronic hunger in 2011-13, down from 868 million people reported for the 2010-12 period, according to the new State of Food Insecurity in the World, 2013 report released on Tuesday by United Nations food agencies. […]

This does not surprise Supreme Court-appointed Food Commissioner and National Advisory Council (NAC) member N.C. Saxena who told The Hindu that although hunger has reduced in China and South-east Asia, there always has been some hunger even in the U.S. and some European countries.

At the same time, he said that “the record of reducing hunger in India and South Asia is not so good. If you look at the cereal consumption of the poor in India, it has remained stagnant or even gone down because they tend to spend their incremental income on health, transport or even tobacco. It is not just high prices of food but lack of demand. It is very unfortunate.”

The report, published every year by the Food and Agriculture Organisation (FAO), the International Fund for Agriculture Development and the World Food Programme, defined chronic hunger as “not getting enough food to lead active and healthy life.” […]

“In poor countries, hunger and poverty reduction will only be achieved with growth that is not only sustained but also broadly shared,” the report observed. […]