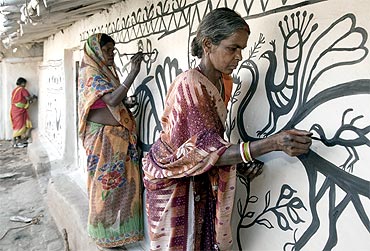 Image: A courtyard in the village of Jorakath is being decked up for a wedding ceremony. The painting traditions of Khovar (for weddings) and Sohrai (for harvest festivals) has been handed down from mothers to daughters for generations but is becoming rarer as traditional mud buildings are replaced with brick construction and pressure from mining impacts traditional village life. View more slides on Rediff.com >>

The state of Jharkhand is home to one of the largest Adivasi (tribal) populations in India. It is also the location of an estimated 40% of the country’s deposits of coal, iron ore, uranium and other minerals considered essential for India’s industrial and energy needs. Read more >>

In the early 21st century, India is experiencing unprecedented economic growth. The middle class is becoming more prosperous and numerous, the cities are rapidly expanding. But to fuel this economic boom, raw materials are being extracted by mining corporations at an ever-increasing rate from mineral-rich states in north central India inhabited by people who can claim to be the oldest dwellers in the land. […]

Can the rights of Adivasi to continue living according to their ancient traditions be accommodated in the new India?

The Tribal Women’s Artist Collective (TWAC)
TWAC from Jharkhand, India preserves artistic traditions passed down from mothers to daughters. It also campaigns to protect the Jharkhand environment and ancient archaeological and rock-art sites across the state. Find out more at www.karanpuracampaign.com