With the passing away of Dr. Nicolaas Nobel (Founder of the Tribal Cultural Heritage in India Foundation), India’s tribal communities have lost a true friend and well-wisher:

A Philanthropist With a Difference
This is a loss of a philanthropist with a difference. Dr Nico did not just collect and donate funds for philanthropy but took an active part in ensuring that the funds were indeed well spent by regularly travelling to the field and forming a deep understanding of the local context of the beneficiaries. The Rani Kajal school in Kakrana would not have been what it is today without his thoughtful support. – Rahul Banerjee (anar-kali.blogspot.nl) | More about Nicolaas Nobel >> 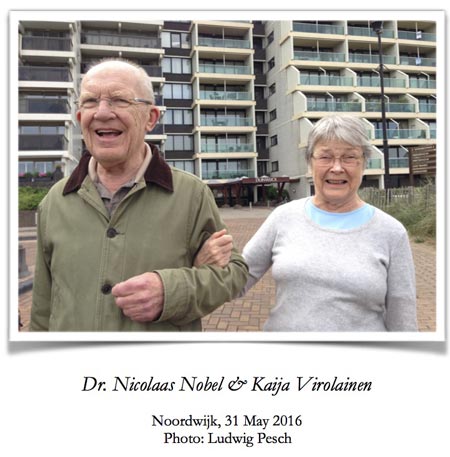 Too humble to even want to be credited for his contribution to rural education and health care, ‘Nico’, as he preferred to be called, often spoke of the remarkable people he first befriended during his studies in Oxford, then visited in India on several occasions.

To begin with, it is among the admirers of Indian culture that Nico would want to be remembered. Yet it seems appropriate to also mention the one person whom Nico mentioned most gladly as his source of inspiration: Baba Amte (1914-2008), regarded as compassion personified in India and beyond. His work is being continued by his sons’ families working for the welfare of hundreds of tribal and other rural communities in India’s heartland. Nico not only shared their ideals but actively supported what the rural poor need most: proper education and basic health care.

It is important here to understand what this entails in the context of modern Indian society, namely grassroots work done by doctors, social workers and educators as envisaged by two pioneers active in many fields – both working towards a modern, truly democratic India: Rabindranath Tagore and ‘Mahatma’ Gandhi, whose fervent follower Baba Amte was:

But he [Baba Amte] was definitively influenced by Gandhi’s ideals of simplicity and truth and his fight against injustice. He spent time at Gandhi’s ashram in Sevagram, took part in his movement to get the British to leave India in 1942 and organized lawyers to defend the movement’s jailed leaders. He was also arrested and imprisoned. Seeing grim poverty in and around his father’s large estate, he gave up his lucrative law practice in his early 30s and began working with untouchable sweepers and night soil carriers. […]

Despite having a back ailment later in his life, Mr. Amte took part in long protest marches for causes including environmentalism, religious tolerance, peace and justice. He was a supporter of India’s indigenous tribes and opposed the construction of a “super dam” project on one of India’s largest rivers; it eventually destroyed many villages. […]