A landmark ruling on “loss of heritage values for the entire state”: Holding a company accountable for damaging an aboriginal sacred site – Australia 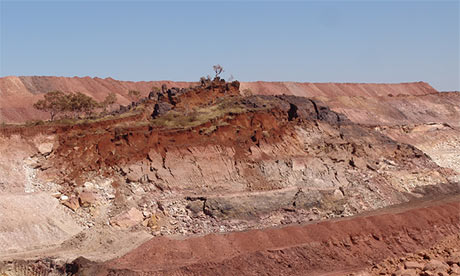 A mining company has been fined $150,000 for desecrating and damaging an Aboriginal sacred site in what the custodians are describing as a landmark ruling.

OM Holdings, a subsidiary of OM Ltd, were found guilty of desecrating the Booto Creek Aboriginal sacred site known as Two Women Sitting Down in the first contested prosecution of its kind in Australia.

The case was brought to Darwin magistrates court by the Aboriginal Areas Protection Authority (Aapa) after a complaint was made to them two years ago that blasting by OM Holdings at the nearby Masai mine had split the site into two with a substantial part of it collapsing. […]

“It was an emotional scene in the courtroom when the decision was handed down,” Scambary said. “There was not celebrating though. It was more a scene of sorrow.” […]

Two Women Sitting Down is about 170 km north of Tennant Creek in the Northern Territory and Scambary said the custodians of the site still faced “the very real possibility” of reprimand from custodians of neighbouring land if they found the desecration had been “allowed” to happen.

He said the traditional owners, the Kunapa people, had been left devastated by the desecration and the site was estimated to be tens of thousands of years old.

“This has real significant consequences for the custodians of the land who are left with this enduring legacy,” Scambary said. “[OH Holdings] grossly failed in its responsibility to the custodian and breached their trust.”

He emphasised it was not an everyday occurrence in the Northern Territory and most mining companies acted responsibly but Aapa hoped the ruling would ensure companies were extra vigilant about protecting sacred sites.

“This a loss of heritage values for the entire state,” he said. “The attitude is ‘it has happened to us, it shouldn’t happen to anyone else’.”

To the Kunapa people the site relates to a dreaming story about a marsupial rat and a bandicoot that had a fight over bush tucker.

The blood from the creatures spilled out on to the rocks, turning them a dark red colour now associated with manganese.

Community representative Gina Smith said the site was part of a dreaming songline.

Like a railway line, each sacred site represented a different station along the way, she said.

“It’s been significantly changed, which makes it much harder for Aboriginal people to recognise the dreaming,” Smith said. “We’re not likely to use it any more.”

The OM Holdings chief executive, Peter Toth, said the company accepted the ruling and apologised unreservedly for the hurt and pain it had caused the custodians. […]

Secretary of the foundation
View all posts by website administrator →
This entry was posted in Cultural heritage, Customs, Names and communities, Organizations, Photos and slideshows, Storytelling and tagged Kunapa. Bookmark the permalink.