“What if kings and kingdoms existed today?”: Matrilineal kingship among the Mannan tribal community of Idukki – Kerala 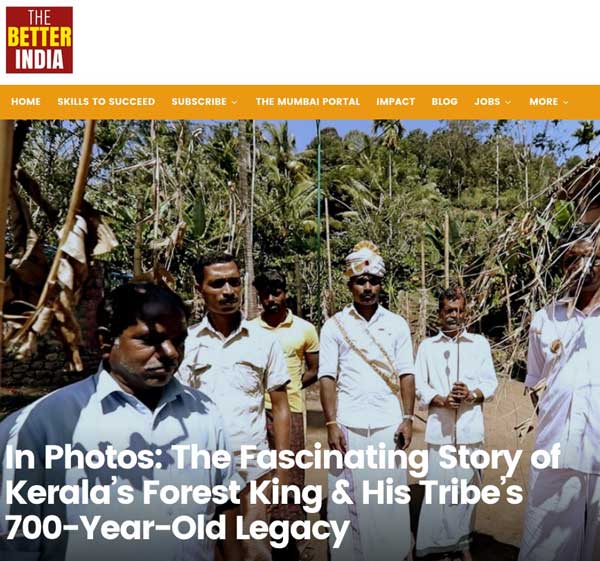 Basil Poulose, The Better India, 13 April 2017 | To view a series of photos and read the full article, click here >>

Stories of kings, palaces and chariots from history books always manage capture our imagination. What if kings and kingdoms existed today? Deep in the forests of Idukki, a mountainous district in Kerala, there still lives a king and his subjects. The Mannan tribe, one of the 35 tribal communities in the state, follows time-honoured traditions, including a system of matrilineal kingship even today. […]

Raja Raman Mannan is the latest in a long line of kings who have reigned over the tribe and preserved the traditions and ecology of the region for centuries. According to the tribal leaders of the district, a ferociously fought war waged between the Pandya and Chola kingdoms 700 years ago. […]

The nannangady (burial urn) believed to be of megalithic era recently excavated from a construction site near Ramakkalmedu in Idukki district throw light on the possibility of carbon dating for further studies as there were bone remains found inside it. […]

Megalithic evidences like dolmens (muniyaras), table stones, burial urns and historic stones believed to be of BC 1050 and AD 300 was discovered at various locations in the eastern parts of the district. It is believed that an administrative hierarchy in Keezhmalanadu with a supporting civilisation existed in the interior areas of the present Thodupuzha spread over the Western Ghats. […]

The Idukki district administration has drawn up a project ‘Discovering Idukki,’ in its annual budget for 2011- ’12 to protect the megalithic sites and initiate studies into them. It also plans to open a megalithic museum at the district headquarters in Painavu for collection and preservation of the historical remains excavated in the district.