Benefits of community screenings: Award-winning documentary “Have you seen the Arana” – Kerala 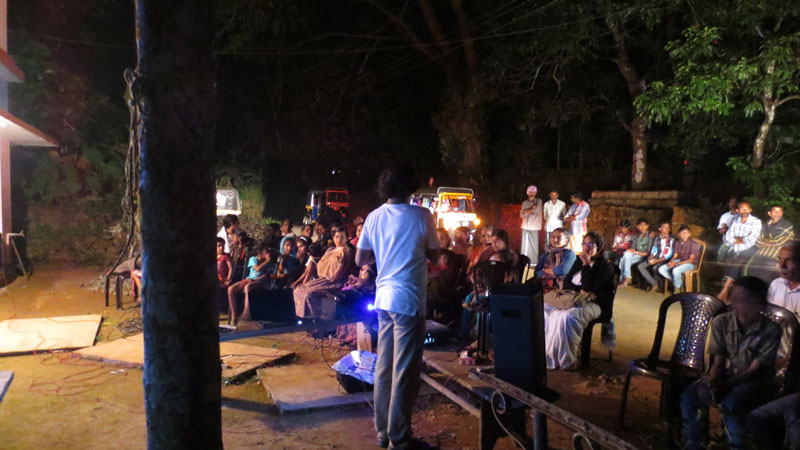 A trial series of community screenings coordinated by FERNS took place in collaboration with initiatives that meet the following criteria:

The community screenings have made local people aware of the need for educational activities on ecology. Each tribal facilitator in the community screening project approached the project differently. Some used used the opportunity to intervene in their own community space. They now realize what it means if traditional food cultures are lost. They have also become aware of the need to improve their knowledge about edible roots and mushrooms growing right there, in their own surroundings. As for the medicinal plants mentioned by Ramettan and Jochi Chechi in the “Arana” documentary, they exemplify local knowledge that, although still valued, remains in danger of being lost. All agree that something has to be done in order to ensure its continuity. Cheruvayal Raman and Jochi Chechi, the main persons portrayed in the “Arana” documentary, have resumed their lives as ordinary people after the film was made over a period of five years. Their efforts to understand and protect their environment as part of daily life have inspired the tribal facilitators.

More community screenings are being planned. The women facilitators became more confident after each community screening session. One of them, Devaki, has become actively involved in Mahila Samakhya (NGO working for the empowerment of women). She plans screening the “Arana” documentary for members in different places. Their ambition is to take up the community screening project to a higher level. Their involvement in the community screenings convinced them that this documentary should be screened in all public libraries across Kerala and  women’s self help groups. Their ooperation is helpful in efforts by FERNS, namely to focus on tribal and environmental issues together rather than separately.