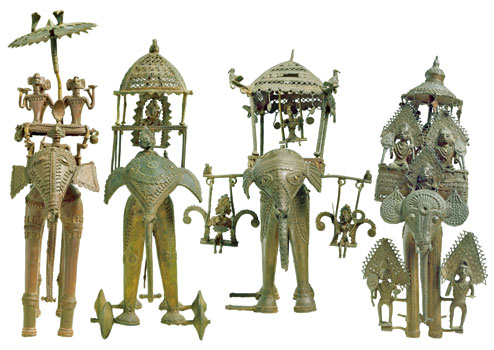 Several years have passed since the Museum Rietberg last dealt with the subject of Indian “tribal art”. The last few exhibitions were dedicated to Indian court art. “Streetparade of the gods” illuminates a region in Central India about the size of Switzerland, which is to this day inhabited mainly by tribal societies, or adivasi (“native inhabitants”). The exhibition will stage an impressive parade of some 300 fascinating metal figurines made for ritual purposes by metal casters during the first half of the 20th century.

Bastar District is a district of the state of Chhattisgarh in central India. Jagdalpur is the district headquarters. The district has an area of 8755.79 km². Bastar District is bounded on the northwest by Rajnandgaon District, on the north by Kondagaon District, on the east by Nabarangpur and Koraput districts of Orissa state, on the south and southwest by Dantewada District, and on the west by Gadchiroli District of Maharashtra state.

Bastar, the land of tribes and about 70% of the total population of Bastar comprises tribals, which is 26.76% of the total tribal population of Chhattisgarh. The major tribes of the Bastar region are the Gond, Abhuj Maria, Bhatra, Halbaa, Dhurvaa, Muria and Bison Horn Maria. The Gonds of Bastar are one of the most famous tribes in India, known for their unique Ghotul system of marriages. Gonds are also the largest tribal group of central India in terms of population.

The tribes of Bastar region are known for their unique and distinctive tribal culture and heritage in all over the world. Each tribal group in Bastar has their own distinct culture and enjoys their own unique traditional living styles. Each tribe has developed its own dialects and differs from each other in their costume, eating habits, customs, traditions and even worships different form of god and goddess.

A large number of Bastar tribals are still living in deep forests and avoid mixing with outsiders in order to protect their own unique culture. The tribes of Bastar are also known for their colorful festivals and arts and crafts. The Bastar Dussehra is the most famous festival of the region. The tribals of Bastar were also amongst the earliest to work with metal and have expertise in making beautiful figurines of tribal gods, votive animals, oil lamps, carts and animals.

[…] The yawning physical and cultural distance between Bastar and Zurich is being bridged by the prestigious Museum Rietberg which is holding an unusual exhibition of around 300 bronze figurines from Bastar.  […]

“The Bastar bronzes are usually considered handicrafts and not high art. But these bronzes have an aesthetic value and we wanted to present them as an artistic collection and enhance their stature,” says Johannes Beltz, curator of South and Southeast Asian Art, Museum Rietberg.
Elephants and horses, gods and goddesses, and swings are all part of the unique collection of bronze Bastar pieces currently on show at the Museum Rietberg in Zurich

Certainly, it is the first time that such a large number of high-quality Bastar bronzes have been brought together. Their value has grown enormously because the region’s tribal traditions are disappearing rapidly. The Rietberg got leading Indologist and cultural anthropologist Cornelia Mallebrein, who’s an expert on tribal art, rituals and religious traditions across India, to guest curate the show.

“Things are changing so fast with the tribals dismantling the old mud huts where these bronzes were kept to make cement temples with cement figures. The aesthetic is changing and the whole ritual tradition is vanishing,” says Mallebrein, who has been doing field research on tribal traditions in India since 1989.

The bronze parade is accompanied by three documentaries by Mallebrein on the famed Dussehra festival in Jagdalpur, the Mandei spring festival and on the metal casters who create the bronzes. “My aim is to give importance to Indian folk art by showing its socio-cultural context,” says Mallebrein.
Collectors Dorothea and Jean-Pierre Zehnder (top) and Heidi and Hans Kaufmann (above) were drawn to the Bastar bronzes during their time in India Cornelia Mallebrein, the leading expert on tribal traditions across India, is guest curator of the Rietberg show. […]

The Kaufmanns, who’ve visited India every year since they left in 1993, have made several trips to Bastar. The nearly 100-piece strong collection that they donated to Rietberg in 2010 includes unusual pieces like Goddess Dankeshwari on a swing. But their favourites are their numerous elephants and the swings. “Each one is different and that’s why they’re so fascinating,” says Kaufmann. […]

Mallebrein points out that each Bastar bronze is unique because of the casting technique and because each craftsman “brought his own vision and desires to the figure” unlike say, the Chola bronzes which followed an established model. “The earlier metal casters were even inspired by the sirhas [the human mediums of the gods] so the connection with the ritual comes through in the art. The bronzes and the rituals go hand- in-hand. You can’t understand them unless you go into the field,” she says.

Yet, modernisation is also causing an “identity crisis” among the tribals, and their “living tradition” is slowly moving to the realm of “folklore”, she says. Perhaps, the Street Parade of the Gods will help more people to understand the nature of that tradition. 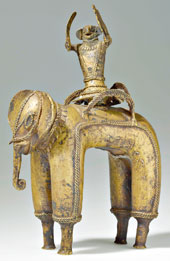 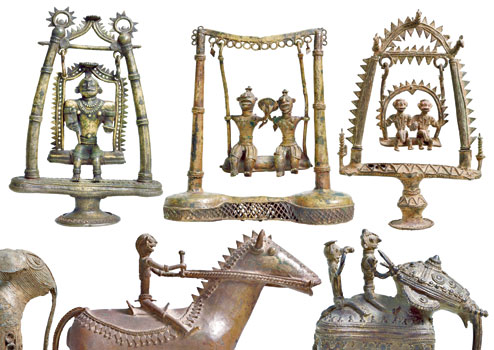 Find up-to-date information provided by, for and about Indian authors, researchers, officials, and educators | More search options >>
Search tips: in the search field seen below, combine the name of any particular state, language or region with that of any tribal (Adivasi) community; add keywords of special interest (health, nutrition endangered language, illegal mining, sacred grove); learn about the rights of Scheduled Tribes such as the Forest Rights Act (FRA); and the United Nations Declaration on the Rights of Indigenous Peoples, Universal Declaration of Human Rights, women’s rights, and children’s right to education; specify any other issue or news item you want to learn more about (biodiversity, climate change, ecology, economic development, ethnobotany, ethnomedicine, global warming, effective measures to prevent rural poverty, bonded labour, and human trafficking).