Slideshow | Glimpses from a model school run for and by Adivasi communities of the Nilgiris: Viswa Bharathi Vidyodaya Trust – Tamil Nadu 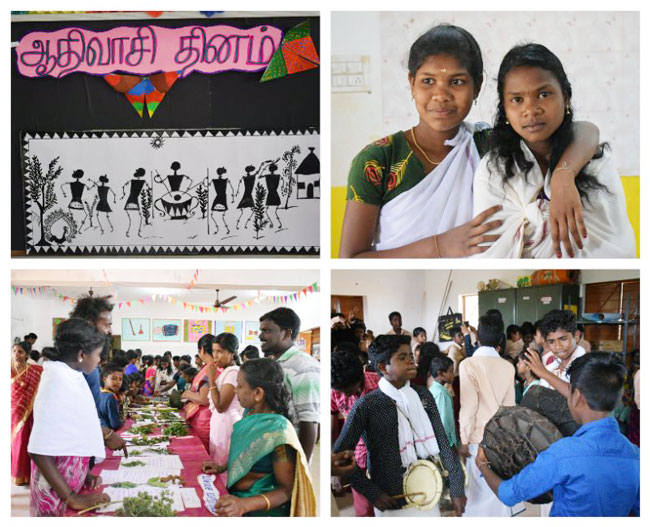 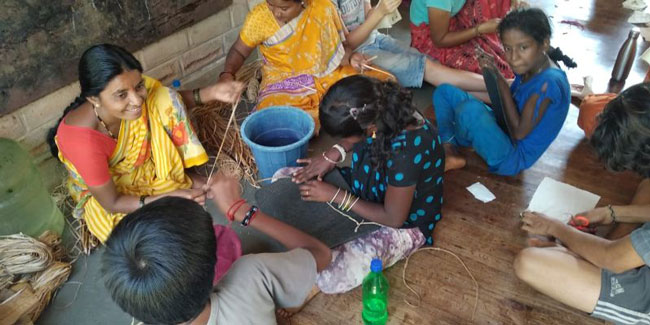 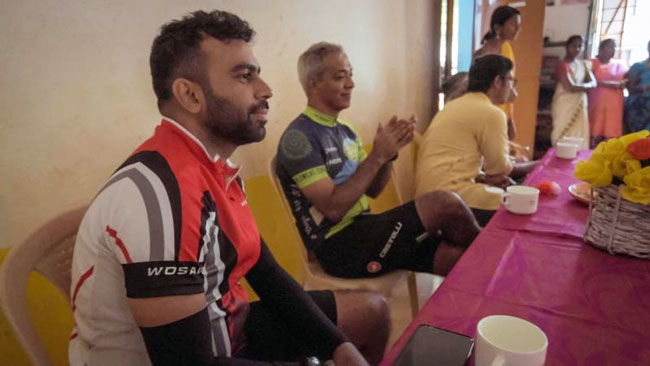 Foldscopes and the world Invisible

As part of the Adivasi Maths and Science resource center activities, a workshop was held for students of grade 5 at Vidyodaya on using foldscopes to explore the invisible world. (From the left: Picture 1 shows a child looking through the foldscope, Picture 2 shows the image of a spider’s leg as seen through the foldscope)

As part of the Adivasi day (December 5) celebrations, students and staff from SSA school put forth an exhibition to showcase various elements of Adivasi life and culture like food, herbs, tools, traditional attire, music and dance (Clockwise from the top left: Picture 1 shows the display at the entrance, Picture 2 shows students dressed in their tribal attire, Picture 3 shows the music and dance, Picture 4 shows the exhibits)

Thanks to the Tour of Nilgiris cyclists, Mr. Rahul Kalia and Mr. Parag Chedda for dedicating their cycle tour to our cause. When they reached Gudalur, they were warmly welcomed by our SSA children and staff.

As we complete more than 2 decades of our work in education, our team decided to carry out a detailed survey in all of the Adivasi villages in Gudalur and Pandalur taluks. The objective is to evaluate our direct and indirect impact on the education levels among Adivasis. (From the left: Picture 1 shows the survey at Pattavayal area, Picture 2 shows the survey being conducted at Erumad)

This year, 8 children from the Pattavayal area and 4 teachers participated in the craft week conducted by Marudam farm school.

Visitors from far away

Thanks to Jean Stewart, Penny Fairclough and Jane Jackson for sharing their time and expertise with our team. (From the Left:  Picture 1 shows Jean conducting a Science workshop and Picture 2 shows Penny during a session with Vidyodaya teachers.

Social Movements and Educational Change: A Case Study of the Adivasi Munnetra Sangam

Political change can be a catalyst for the transformation of an educational system through the positioning of grass-roots social movements as an alternative to bureaucratic state mechanisms and non-governmental organisations in designing and implementing education reform. The case study of the Adivasi Munnetra Sangam, a social movement in Gudalur in Tamil Nadu, is used to illustrate how fundamental shifts in control of power within the system can result in greater inclusion of oppressed groups.

The debates on making Indian education more inclusive and egalitarian tend to revolve around two kinds of paradigms:
(i) Improving curricula, textbooks, and teaching methods and bringing them in line with educational goals, which may range from creating skills and human capital at one end of the spectrum to self-discovery and good citizenship at the other (Krishnamurthi 1953; NCERT 2005).
(ii) Enhancing organisational and systemic processes, which may range from improving teacher training colleges to privatisation of schools to strengthening the roles of leaders (Bruns et al 2011; Bush 2011). […]

The educational establishment has entrenched interests within it for whom the improvement of Adivasi education is not a priority and who may even look down upon them as second-class citizens. […]

Gudalur block lies in a valley of the Nilgiri hills and features a mixture of forest, plantations, and homesteads. It is home to five Adivasi communities—the Paniyas, the Bettukurumbas, the Mullukurumbas, the Kattunayakas, and the Irulas. In total, the Adivasis number around 20,000 people and constitute about 10% of the population of Gudalur and its adjoining territory.

The Paniyas, who constitute around 40% of the tribal population and are the single largest tribe, were mostly bonded for a few centuries to a migrant landowning group from Karnataka called the Chettis. The Mullukurumbas have small landholdings, which they supplemented by hunting. The rest have primarily been hunter–gatherers.

Gudalur has been growing tea and coffee since the mid-19th century. British planters started the process of clearing the forests and this compelled the Adivasis who lived in them to constantly stay on the move. There was no protest at the time as the forests in which they dwelled stretched into Kerala on one side and Karnataka on the other. In the 1960s, the forests came to be occupied by migrants from Kerala who became small landowners. The 1970s saw another wave of migrants: Tamils from Sri Lanka. […]

Amman Madan (ammanm@gmail.com) teaches at Azim Premji University, Bengaluru. Rama Sastry and B Ramdas (bramrama@gmail.com) are trustees of the Viswa Bharati Vidyodaya Trust, Tamil Nadu. | Read the full article in the The Economic and Political Weekly (Vol. 54, Issue No. 5, 02 Feb, 2019) >>

The Economic and Political Weekly, published from Mumbai, is an Indian institution which enjoys a global reputation for excellence in independent scholarship and critical inquiry.