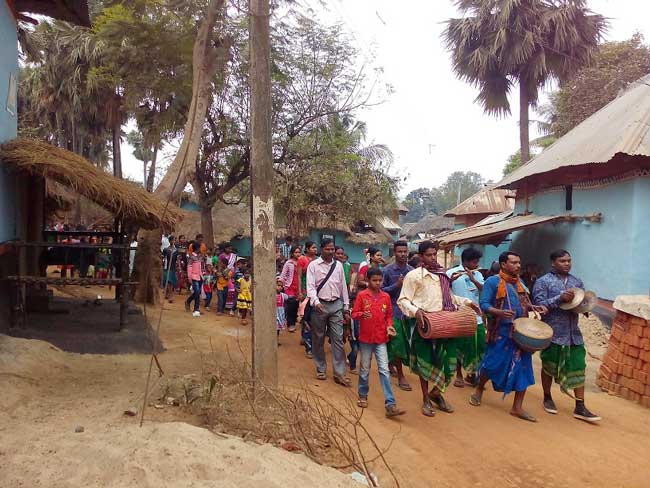 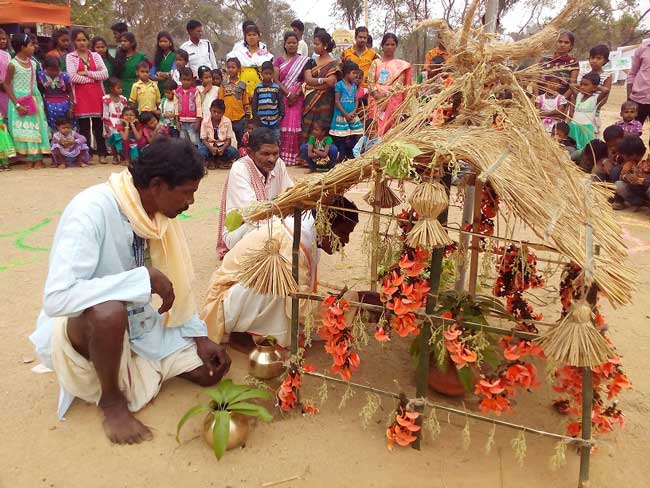 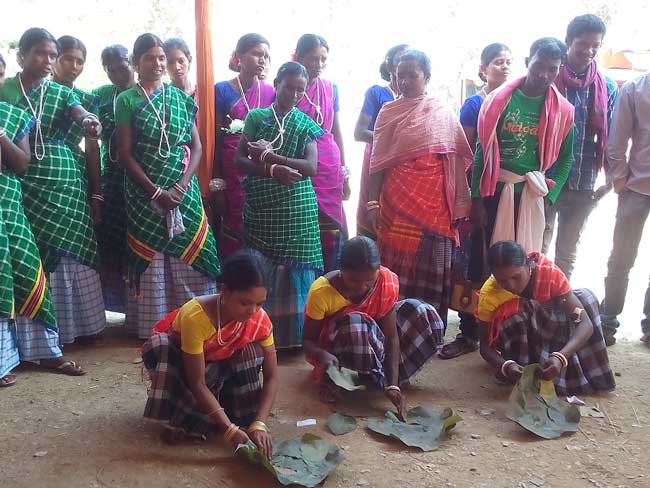 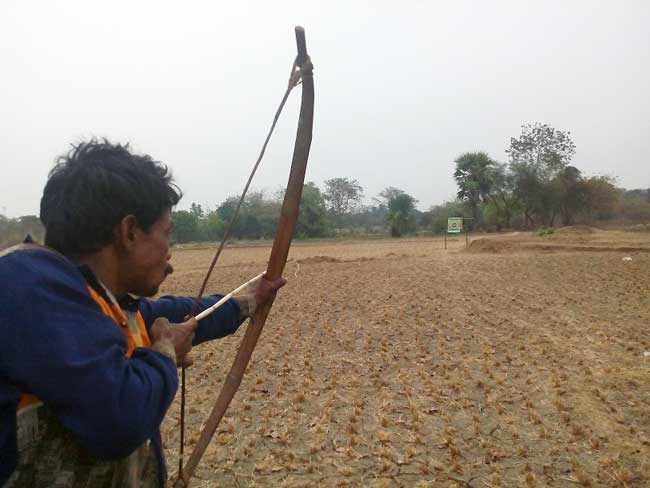 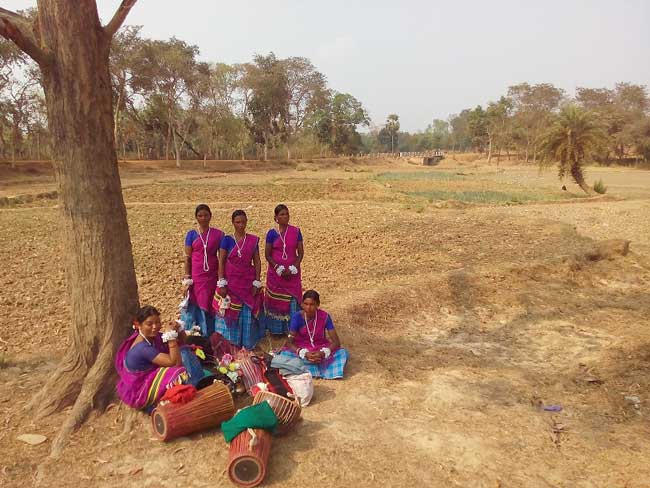 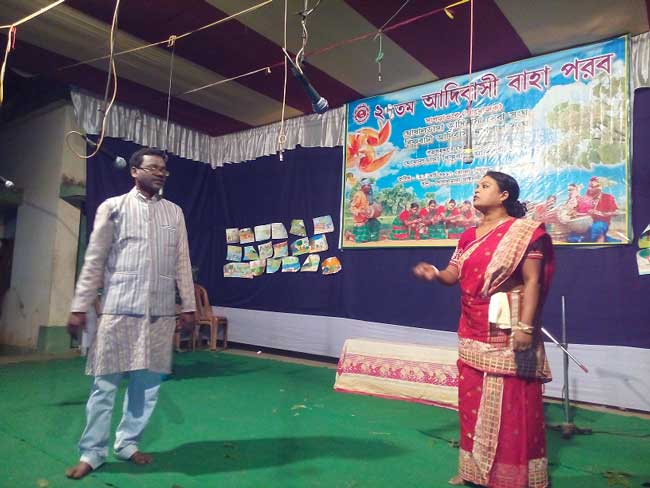 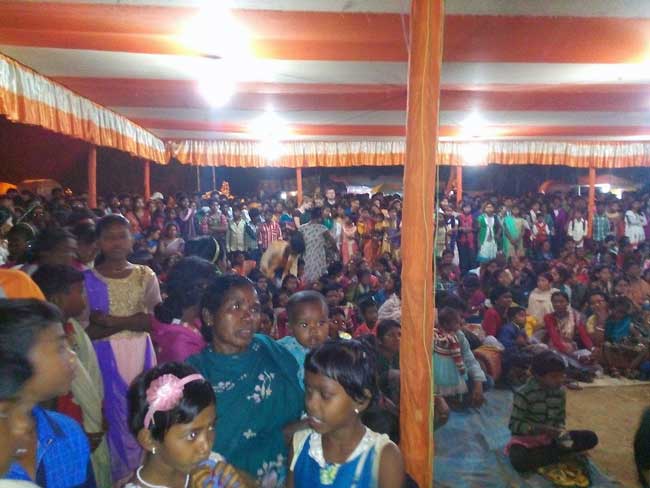 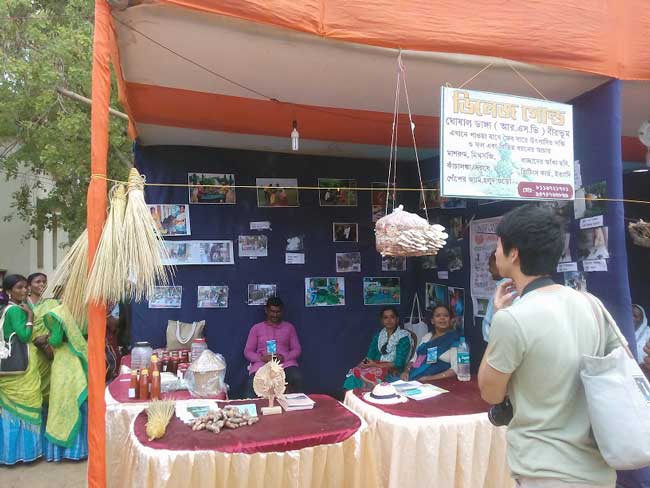 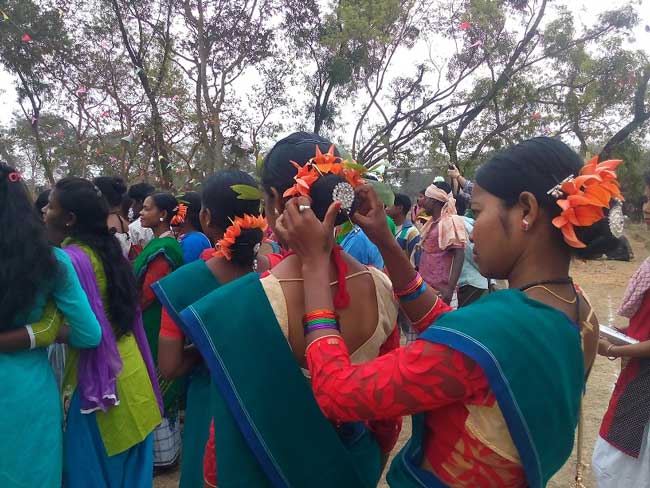 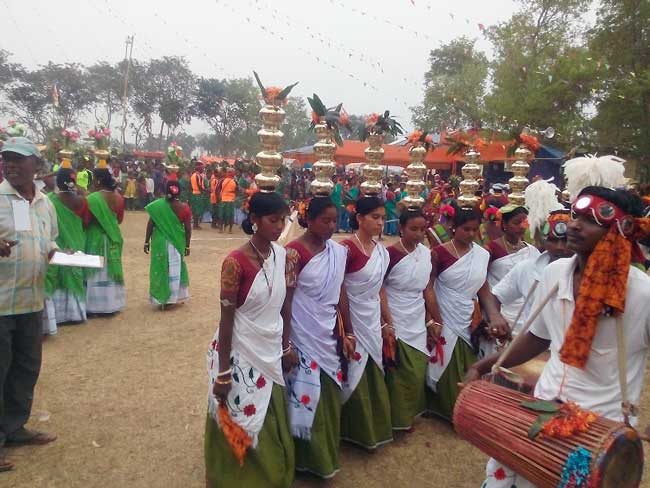 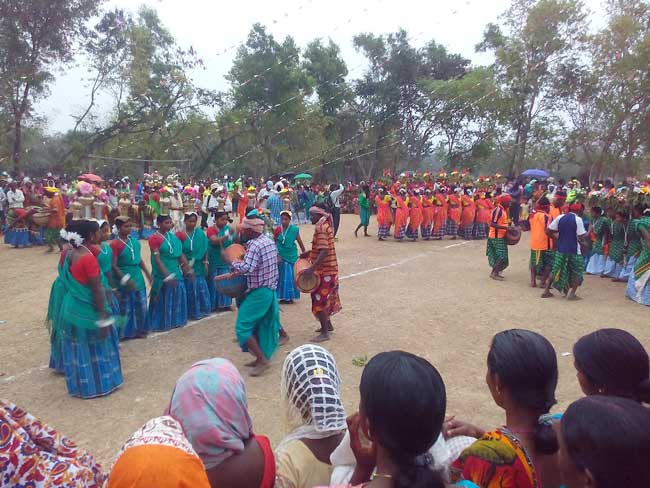 BAHA means ‘flower’ in Santali . It is the second biggest festival of the Santals after SORHAI, the harvest festival. It is also considered the holiest festival of all and celebrated in the Bengali month of Falgun (Feb-March) every year. Falgun is the first month of Santal calendar. The festival celebrates man’s communion with nature. This is the time when most common trees, like Mohuwa, Peepal, Mango, Polash, Neem, Sal, Muringa bear new leaves, flowers or fruits. This is the time, Santals believe, when the trees become reproductive and one should not disturb their body and soul by plucking or cutting off their buds, flowers, leaves and branches. Therefore, Santals never pluck or eat the flowers or fruits of Mango trees, never tear off the leaves of Peepal and Neem trees before celebrating Baha. Women do not use Sal flowers in their hair for decoration and trees are not cut for firewood at this time. If it does happen, then the firewood is not brought to the village but is kept outside. Any family who breaks such rules will not be visited by the village priest who normally enters every family’s house during the Baha rituals.

In our Birbhum District (West-Bengal), the Baha festival is celebrated for two days. The ‘Naike’ or village priest who is the main celebrant of the festival, prepares himself physically and mentally on the first day by taking a bath, by wearing new clothes and by fasting. He also sleeps alone at home that night, away from his wife. The main puja of the Baha is held at the ‘Jaher Than’, the sacred grove outside the village. The Naike along with the village elders like the ‘Manjhi haram (headman), the Jog Manjhi (assistant headman), the Godet (convener), the Kudamnaike (assistant priest) and other villagers go to the ‘Jaher Than’, clean it and make a small symbolic hut with thatch for the offering on the next day. He constructs a number of ‘Pinds’ (altar) and rubs them with cow dung. In our village Bishnubati, sixteen altars have been made, but this number differs from village to village. Each ‘Pind’ is named after one of the benevolent ‘Bongas’ (spirits) who are located in different places of the village. The ‘Bongas’ were discovered by our ancestors who founded this village. When they chose the place to build a new village a boundary was identified. Within this boundary, different spirits bearing different names are being worshiped. These spots could be a bush, a forest, any water body, a roadside space or simply a barren land. We believe that these spirits are the original inhabitants of these places and are protecting them. Therefore our village people can be happy and prosperous only if we live with them harmoniously.

In the morning of the second day, the headman sends the young men of the village to the forest to collect Sal flowers. After that the Naike, along with the villagers, goes to the ‘Jaher Than’ with sixteen chicks, collected from the village, and offers then to the spirits of the village and of the surroundings. During the offering, water instead of rice beer is being used.. The Naike prays to the spirits and to the ancestors who after death have joined our benevolent spirits. The Naike prays for all the villagers, for the children, the youth, the animals who go out to the fields, forests and rivers every day so that life may remain safe, and that the benevolent spirits may protect them from all evils spirits.

Later the Naike and the villagers prepare khichuri and eat it outside the village. In the afternoon, the Naike, along with his companions, visits all the families and distributes Sal flowers. The woman of the house receives the flower from the priest in the folds of her sari after she has ceremonially applied oil on his feet and washed them. An unmarried man carries the water on his shoulder and after exchanging greetings with her, sprinkles it on the shoulder of the woman. After receiving the flower the women put it in their hair and the men behind their ears. The rest of the flowers are kept in the ceiling of their thatched or tiled roof. This is the sign that the village has celebrated Baha and men and women can now sing, dance, drink rice beer and enjoy themselves.

Santal festivals have always been closed community festivals. There is little scope for non-Santals to join and integrate with them. Considering this limitation, 28 years ago then registered societies of Ghosaldanga and Bishnubati started to organize the Adibasi Baha Parab which is an extension of the traditional Baha festival. The main objective was to open this festival to Santals of other villages and to non-Santals and thus make it inclusive. We wanted to disseminate the ideas of Baha among the people at large. We celebrated for one day after the traditional Baha of the village is over. We hold it on the large playground of Ghosaldanga. After the procession in the village, a symbolic Baha ritual is performed on the playground. Later various tribal sports, folk dances are organized — everybody can take part. In the evening the prize distribution, felicitations, Santali dramas and a whole night musical programme take place. This year, forty folk dance teams from various villages of Birbhum District and Jharkand took part.

The recipient of this year’s Baha Award was a well-known Santal traditional medicine man, Mr. Ram Hembrom of Ramnagar village, Birbhum District. Mr. Hembrom has grown 475 different varieties of herbal plants in his courtyard and is treating the villagers with these medicinal plants since the last thirty years. Santali dramas ‘Kriya’ and ‘Monetabon bodolabon’ were also staged by Sidu Kanu Smriti Sangha of Nildanga and Kalitola Sporting Club. Another special event of this year was the felicitation of the ‘Manjhi baba (Santal traditional leaders) of ten different villages by the local police administration who later talked about the positive impression this inclusive programme has created.

Dr. Boro Baski works for the community-based organisation Ghosaldanga Adibasi Seva Sangha in West Bengal. The NGO is supported by the German NGO Freundeskreis Ghosaldanga und Bishnubati. He was the first person from his village to go to college as well as the first to earn a PhD (in social work) at Viswa-Bharati. This university was founded by Rabindranath Tagore to foster integrated rural development with respect for cultural diversity. The cooperation he inspired helps local communities to improve agriculture, economical and environmental conditions locally, besides facilitating education and health care based on modern science.

For inquiries on Santal cultural and educational programs, please contact:
Mob. 094323 57160 or borobaski@gmail.com

To locate the Museum of Santal Culture in Bishnubati village (near Santiniketan) on the map seen below, open by clicking on the left button: