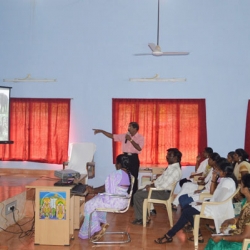 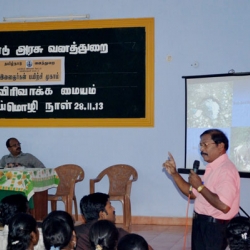 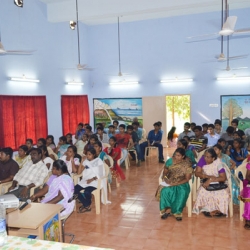 A one-day training camp on biodiversity was held for college students at the Forestry Extension Centre at Aralvaimozhi recently.

In his presentation on man-animal conflict, environmental educator S.S. Davidson said that elephant was a social animal that lived in herds.

“It is a matriarchal society where the oldest female is the herd leader and the adult males are solitary. ‘Makhna is the tusk-less male elephant. Each adult animal consumes 200 to 250 kg of fodder and drinks 150 to 200 litres of water. It is an extraordinary animal. It can differentiate between 14 to 16 herds and smell a water source more than 15 km away. Its foot can detect seismic vibrations,” Mr. Davidson said.

“Elephants play a key role in forest ecology through seed dispersal. Its dung is a good organic manure for the forest flora. Man-elephant conflict occurred owing to human population stress in forests and its fringes, habitat loss, attractive domestic crops in the forest peripheries, encroachments of elephant corridors and forest fragmentation,” he said. […]

P. S. Suresh Kumar
At a time when the Forest Department is using various methods such as erection of solar fence to prevent wild animals from entering villages and raid crops, Kani tribe in the Western Ghats of Kanyakumari district follow age-old techniques to good effect.

Madhavan Kani of Padupparai Kani settlement says the techniques are passed on from one generation to the next. He says they have developed tools using bamboo and wood to chase animals back into the forest before they raid agricultural crops. They use ‘stone bow’ — a bamboo bow with two strings — using which they shoot stones instead of an arrow to chase animals such as monkeys, langurs, squirrels and birds that may destroy their crops.

They also use ‘Kulikkai,’ made of bamboo. It is two-feet long. A wooden stick is kept in place in the middle cross-wise using a rope. When the tool is moved left and right, the wooden piece in the middle strikes on the hollow bamboo and creates noise. On hearing this noise, animals get scared and leave the fields.

Another tool of the Kani tribe is ‘adi-udukkai.’ It is made from a two-feet-long bamboo piece. A slit is made in the bamboo for half an inch where the slit portion remains as a separate piece, but remains attached to the major piece at one end. When the bamboo is shaken upwards and downwards, the slit portion strikes at the major piece, the vibration of which creates noise to scare away animals from their fields. This tool is used during daytime to scare away squirrels, monkeys, and birds. At night, it is used to drive away wild boars and small nocturnal animals.

Chathan Kani of Velampi kani tribe settlement says four to five feet deep trenches are dug to prevent elephants from entering agricultural fields. Because of its large size, an elephant cannot step down into a narrow and deep trench and come out of it, he says.